Born in Groenekan, the Netherlands. Trained as a garden and landscape designer in Boskoop, the Netherlands and at The Royal Art Academy in Copenhagen, Denmark (Garden and Landscape Architecture, Urban Renewal and Industrial Design). Since finishing his education he designed numerous gardens for private families and public works, was and is active in flora-and fauna research on construction locations and in consulting estate owners on their flora- and fauna management.

He has been asked 3 times in the jury of the BBC Wildlife Photographer of the Year competition and twice in the Golden Turtle Art show in Moscow, Russia (2013-2014)

He is the founder and director of Wildlife Art Promotion (WAP, 1977) and the Artists for Nature Foundation (ANF, 1990).

The objective of WAP is to give more exposure to talented and renowned nature artists. With WAP, Ysbrand organises since 1978 yearly exhibitions. These have taken place in the USA, Canada and many European countries.

ANF is a non-for-profit organization that realises nature conservation through nature art of the highest quality standards. As it is very close to his heart, he spends most of his time on this foundation. Since the founding of ANF, Ysbrand and his changing group of artists have realised 15 conservation projects world wide, not only leading to concrete conservation results, but also to numerous exhibitions in Europe and the USA. 13 project books and 6 project films.

Documentaries on film have been published and were used for active conservation lobby.

ANF has worked together with over 130 artists from more than 25 countries. Conservation partners in the projects were organisations like WWF, Bird life International, The Wildlife Trust, Clean Water Alliance, The forestry Commission, Glasgow Museums and Galleries, Territory I Paisatge and Bosques Sin Fronteras and SPNI in Israel. Specific projects of ANF were further fully supported by royals like King Carlos of Spain, the former Queen Noor of Jordan, the late Prince Bernard of the Netherlands and HRH Prince Philip of the United Kingdom.

Wildlife Art Promotion (since 1976) is dealing in Wildlife Art and Sporting Art from past and present masters, and interesting antique items related to the genre. It’s only high quality that counts for him. He is keen birder, photographer, art collector, gun dog trainer, gardener and cook, who tries to subsist from the land as much as possible. In 1974 he moved to Bruinehaar, an estate in the eastern part of Holland where he still lives in an early eighteenth century farmhouse. Ysbrand has two sons and a daughter from an earlier marriage and 3 grand daughters.

He shares his life with his German partner Renate Zöller. She studied Slavonic languages and Eastern European history. Nowadays she is a freelance journalist and the author of several books including the ANF Sark project book!

In 2016 King Alexander of the Netherlands appointed him Officer in the Order of Orange Nassau (comparable with CBE in the UK) for his work in International Nature Conservation. 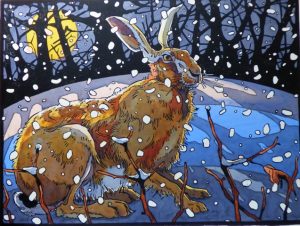 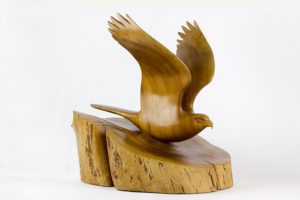 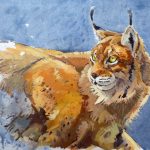